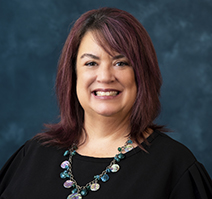 Kristy Underwood was appointed to the position of Executive Officer of the California Board of Barbering and Cosmetology on August 10, 2005. As Executive Officer, Kristy oversees one of the largest barbering and cosmetology regulatory boards in the country with 104 employees and a budget of over $19 million.

Since her appointment, Kristy has made it a goal to provide education to consumers and licensees on the dangers that face consumers while receiving barbering, cosmetology and electrology services. In Kristy's efforts to protect consumers she implemented new regulation for the cleaning and disinfecting of whirlpool footspas and legislation that takes disciplinary action against a licensee where a whirlpool footspa is found to be an imminent risk to consumer safety.

Kristy brings 16 years of experience in working within regulatory programs to the Board. Prior to her appointment as Executive Officer, Kristy held several positions in the Department of Consumer Affairs including positions with the Professional Engineers Board, Hearing Aid Dispensers Bureau, and multiple other regulatory programs. Ms. Underwood graduated from the Leadership for the Government Executive Program at Sacramento State University.

Kristy is dedicated to continue her goals of working with and educating both consumers and the industry in hopes that no consumer harm will come from a barbering, cosmetology or electrology service.